ClubReady + myFitApp | See How You Can Elevate Your Mobile Design and Crush Your Goals.

Evolution of the Fitness Industry: A Brief History of the Public Gym 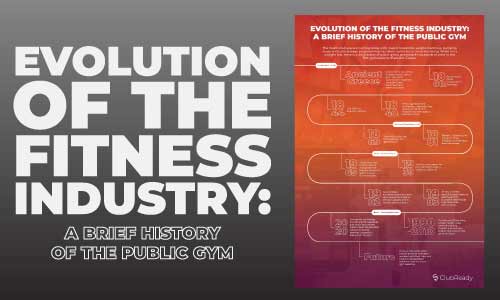 The health club you are running today with rows of treadmills, weight machines, pumping music, and cutting-edge programming has taken centuries to come into being.

While not a straight line, there is a long history of public gyms, going back thousands of years to the first gymnasiums of ancient Greece. Many things that constitute a healthy lifestyle were apparent even in ancient times, it has taken many years and advancements in science to the change the public perception in many cases. And there is still work to be done. We don't know exactly what the future holds, but it's good to have an understanding of the journey to this point.

A Timeline of the Fitness Industry 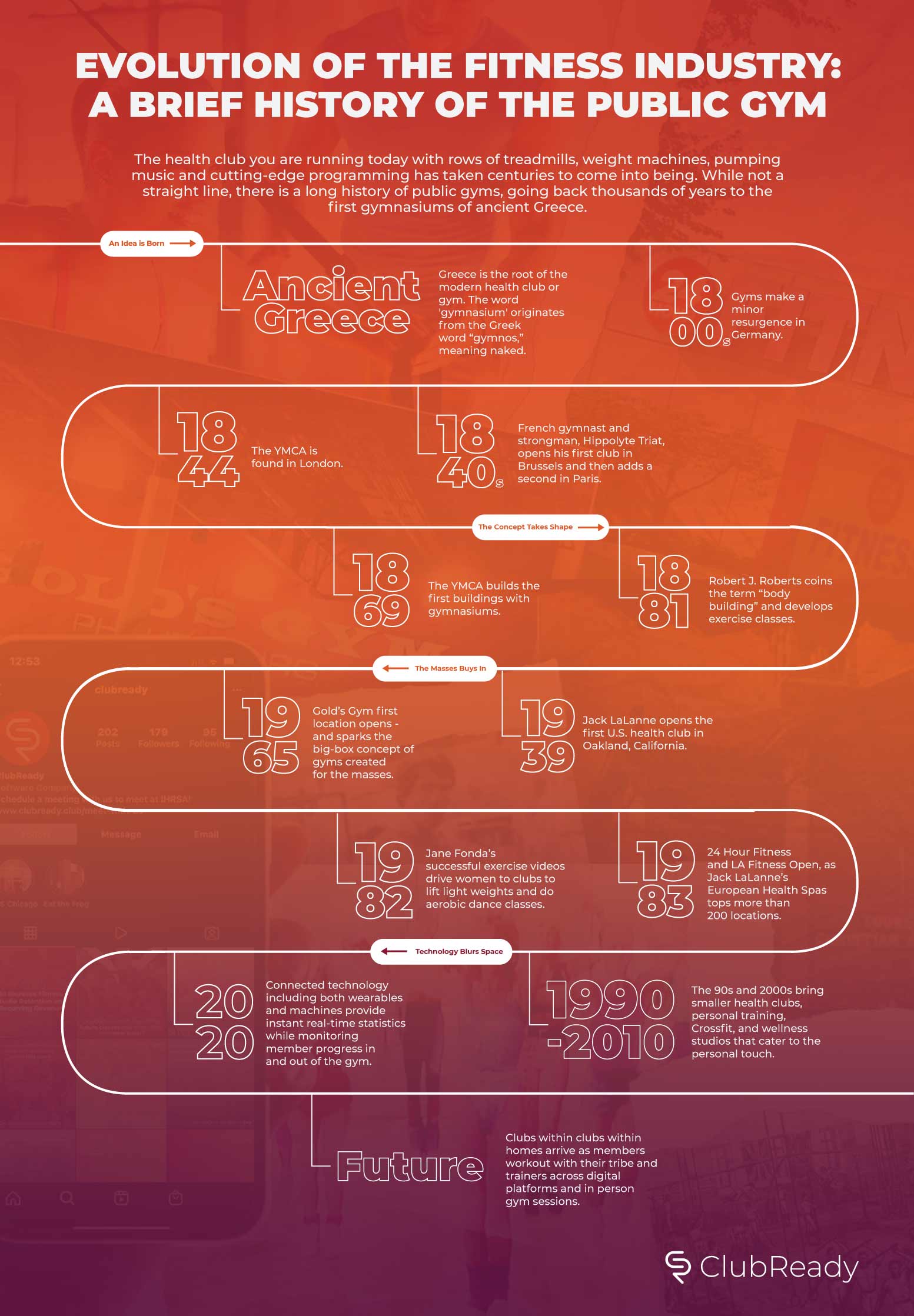 Sure, running to catch your food –or avoid being it—was the way humans got and stayed in shape from the beginning of time. However, over time, people looked for ways to improve their health and performance in less life-threatening ways.

While today’s health clubs are full of yoga pants and technology, you were more apt to find naked men preparing for competition and battle in the early days of public gyms. Greece is the root of what we now know as the modern health club or gym.  The word 'gymnasium' originated from the Greek word “gymnos,” which translates to naked. Gyms at that time were usually a place for the education of young men (it will be a while until we get to women in the gym), which included physical education along with educational pursuits along with bathing. The ancient Greek's designed these public gymnasiums for athletes to train for open games such as the Olympics. Fitness and care of body was part of the overall philosophy of the ancient Greeks along with education. In fact, highlighting the public gym roots of Athens, were the Academy with Plato, and Aristotle's school the Lyceum.

The Dark Ages and Rebirth of Fitness

After the fall of the Greco-Roman Empires, gyms along with art and music disappeared as the appreciation and pursuit of a healthy and sculpted body was frowned upon. It was not until the early 1800s that gyms made a minor resurgence in Germany. Still, though, these were not gyms as we think of them today. However, by the middle of the 19th Century schools began to build gymnasiums to help bolster their burgeoning athletic programs, which rekindled the public’s fascination and appreciation of not only the health benefits of exercise but the aesthetics of looking more fit.

The first commercial gym is typically credited to French gymnast and vaudeville-strongman, Hippolyte Triat. He opened his first club in Brussels and then added a second in Paris in the late 1840s. At the end of the 19th century, another gym was established by an entrepreneurial music hall strongman, Eugen Sandow. In 1901 Sandow staged the world’s first physique contest, and he later promoted the burgeoning fitness lifestyle by marketing various publications, equipment, and dietary products and by operating a chain of fitness centers throughout Great Britain. To this day, the prize presented at the Mr. Olympia contest is named for this health club and fitness pioneer.

Founded in 1844 in London England, The YMCA would eventually lead the way for fitness for many men. According to the YMCA website, The first buildings constructed with gymnasiums opened in 1869. In 1881, Boston YMCA staffer Robert J. Roberts coined the term “body building” and developed exercise classes, which are the forerunner of today’s health club model. YMCA came into existence. At the forefront of the health club model that would grow through the 20th Century.

In 1939, fitness legend Jack LaLanne opened what is believed to be the first U.S. health club in Oakland, Calif. At that time, doctors advised patients that there were dangers associated with lifting weights and rigorous exercise, LaLanne found success and designed and introduced many of the machines that are still mainstays on traditional gym floors such as first leg extension machines and pulley-cable based strength equipment. He even was an early proponent of women lifting weights, although very few took him up on it in the early days.

Of course, today, women make up more than half of the gym-going population and some of that rise can be credited to the birth of health club chains in the 1960s and 1970s. Prior to the birth of the health club chain, fitness centers were primarily fringe dingy boxes with rusty iron and maybe a boxing ring where predominantly men lifted weights in pursuit of perfection or trained for sports—not much different than the motivation for the first gyms in ancient Greece.

While still fringe and a Mecca for early bodybuilders, the birth of Gold’s Gym in Venice, Calif. in 1965 signaled the beginning of the rise of a new big-box concept for health and fitness that could –and would be—recreated to open the doors to the masses.  Joe Gold followed his success with Gold’s gym by founding the World Gym chain in 1977.

Mainstream and the Women’s Movement

The adrenaline-and-big-hair-fueled 80s gave rise to an increasing number of gym chains including 24 Hour Fitness (1983) and LA Fitness (1984), as Jack LaLanne’s European Health Spas topped more than 200, before licensing them to Bally Company. Additionally, the success of Jane Fonda’s exercise video drove many legwarmer-clad women through the doors of these clubs to lift light weights and do aerobic dance classes.

The mega-chains continue to this day, but as with many things, today’s consumers are looking for a more personal and intimate experience and throughout the 1990s and 2000s smaller mom-and-pop health clubs, personal training, and mind-body studios along with Cross-Fit and other specialty exercise facilities that cater to more of the personal touch.

Looking back at history is far easier than looking ahead to the future. What do you think the future of the fitness industry is? Share your thoughts with us on social: @ClubReady or facebook.

This ebook, The Fitness Owner's Success Kit, can serve as a playbook to help you make the transition.

Ready to Get Started with a Single Solution?

Discover how much ClubReady can grow your business.

Provide your email address and we will get you directed to the appropriate login page: